Power Up Your Child’s Brain

Power Up Your Child’s Brain

Wouldn’t you feel better about yourself as a parent if you gave your child every tool they needed to emotionally and mentally do their best in school and life? Author and educator Dave Beal will give you 10 tips to help your child achieve that goal in his book, The Brain Power Classroom. And while you’re teaching your child these tips, try applying them yourself and see how much they add to your life.

What Beal Learned as a Teacher 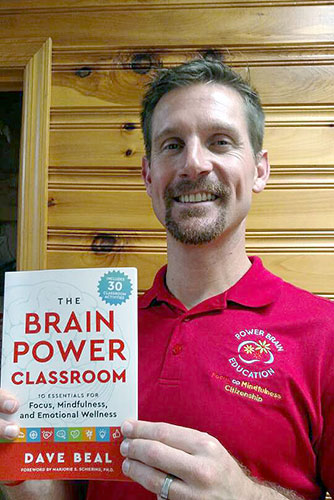 In his early years in education, Beal began teaching at an inner-city school. Fights were a daily occurrence, and a lot of the students had home lives that weren’t conducive to learning and doing well in school—some of the challenges included poverty, foster care, abusive home situations, and family members of the students landing in jailed or being killed. Learning wasn’t a priority for these kids—surviving was.


Beal tried several methods to reach them and get them interested in learning, but nothing he tried seemed to resonate. Then he heard of a Brain Power workshop and thought it might help with his classroom, so he signed up, and paid the training out of his pocket.

Beal was thrilled he took the gamble. After the two-day workshop, he felt energized and refreshed by the physical exercises, the meditation, and mental flexibility training. When he took those lessons to his classroom, he was astounded by the changes he saw in individual students and the classroom as a whole.

In his book, Beal recounts one story about how he stopped a brewing fight by instructing the two boys who were at odds to do one of their Brain Power activities—push-ups. Instead of having a fist fight, they solved their differences by having a push-up duel.

The principal noticed the difference in Beal’s students without knowing he had implemented something different in his classroom. After sitting through a class and seeing the activities, she gave permission to start the program in more classrooms.

How To Implement Beal’s Program at Your Home

Beal’s program will work in any classroom or any home setting. But to bring about changes in your children, they aren’t the only ones who have to think differently—you do too. And that requires training your brain. Here are a few of the 25 tips Beal shares in The Brain Power Classroom.

Shannon Serpette is a freelance writer who has earned multiple Illinois Press Association awards during her two-decade career. When she isn’t writing, she is pursuing her passions – running, kayaking, metal detecting, and spending time with her two children. More by Shannon Serpette

Leave a reply Click here to cancel the reply

This site uses Akismet to reduce spam. Learn how your comment data is processed.

By Brandon Lee, DOM / No Comments

June Editors’ Picks: Books to Take Back Your Brain